The issue of large carnivores and the damage they inflict upon farmers' livelihoods has been the subject of political debate since the first encounter between predators and livestock farmers. However, despite all the efforts of farmers and the measures put in place by the authorities of the countries concerned in the European Union, the strict protection status of large carnivores renders the measures ineffective, and the actions taken in the context of the debate with a view to establishing harmonious coexistence between humans and wild predators insufficient.

Next week, the European Parliament's Committee on Agriculture will once again have this topic on the agenda, with the intention of engaging in a more in-depth debate. I hope that real change can be brought about by bringing to light the devastating damage wrought upon the welfare of both humans and domestic animals by large carnivores, as well as the constant threat they represent for our rural population.

Species of large carnivores are experiencing unchecked and unlimited growth in Europe. This is leading to repopulation of rural areas and even certain urban areas with wolves, bears and even lynx, which are starting to appear in areas where they haven't been seen in decades or have never been seen before. Dogs, sheep, cattle, ponies and even humans are falling victim to unrestrained attacks, with injuries ranging from abrasions to killings in numerous cases. In France, in 2020 alone, 9,872 animals, mainly sheep, were killed by the national population of wolves. Over the course of three years, from 2018 to 2021, close to 30 Romanians were killed by bears.

To help illustrate the extent of the issue in Europe, the present statistics include neither all the affected European countries, nor all the species of large carnivores causing damage. These are only some key figures reported by national authorities which can help us understand the impact and development of the problem. 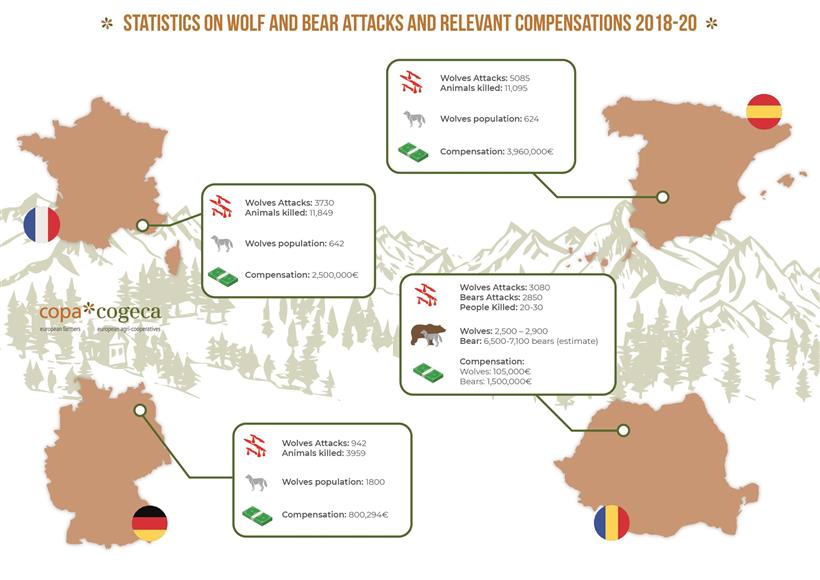 The cost for European taxpayers amounts to 28.5 million euro per year in compensation payments for the damage caused to animals, assets and local infrastructure. The average cost per predator per year between 2005 and 2013 was 2,400 euro for wolves and 1,800 euro for bears. If we add to this the mitigation measures imposed on farmers, foresters and inhabitants of rural areas in their daily lives, the LIFE programme has generated a cost of 88 million euro since its inception, and an additional 36 million euro have been promised for other measures.

But the true cost is not only monetary, it also lies in the psychological affect this can have on humans and domestic animals.

Livestock farmers suffer from psychological damage caused by injuries, abortions, drops in fertility or the loss of the entire flock. Livestock guardian dogs, which are financed in part by the EU, are often killed or wounded due to the intensity of the physical force with which predators attack.

As a livestock farmer, you suffer the loss of your flock, the loss of your income, the increase in costs of labour and material, and having to use your own funds to finance 20 % of the protection measures deployed. On top of this comes the psychological pressure of having to be constantly on the lookout in fear of the next attack, and not knowing whether the flock will survive the night. Some farmers have even taken to sleeping with their flock in sleeping bags, away from their families and their homes, in order to protect their livelihoods. As an inhabitant of a rural area, you now must live there in the knowledge that the village you have known your entire life or which you have chosen to live is no longer safe. As a hiker or tourist, you are even more at risk because you deliberately walk about the countryside where predators which may not have been there five years ago are now numerous and aggressive.

Allow me to share with you some of the measures the Commission presented as the solution to achieve "harmonious coexistence" between predators and their prey: protection fences, protection dogs, noise-emitting scare devices, housing for livestock, guarding. However, these measures are ineffective when it comes to curbing the growth in numbers and the ferociousness of the attacks. The most protected areas are those where the pressure of predation is highest. Predators pass over or underneath fences, injure or kill dogs, get used to the loud noise, which is part of their attack rituals, and the housing becomes a confined space where their prey has nowhere to escape. At the same time, in the areas that are being repopulated by large carnivores, often the predators have not yet developed a fear of humans due to their lack of contact or their traditional fear of urban settlements, such that they are not scared off or really affected by the devices.

The lack of action by the EU on this issue is leading to serious harm to the welfare of animals, almost as though livestock were considered superfluous and it were considered normal for them to suffer so that the wild species may survive. Initially there had been concern about the dwindling numbers of these species of predators, now, however, with nothing to restrain their attacks, the free availability of food is allowing their populations to increase exponentially and uncontrollably.

My own experience as a farmer and livestock owner in France has shown that the French Wolf Plan and its measures, preventative as well as financial, are ineffective and dangerous for the human population and domestic animals in our rural areas overall. However, this is not just a French issue, it is a European issue, with European measures and restrictions on a European level, which means that it requires a European solution. The funding for the protection of the countryside against large predators should not come from the CAP or be taken from the farmers' pockets. If civil society and the Commission want wolves, bears and lynx to roam our lands, they should finance them with funds that are not from the CAP, and should ensure that farmers are not the only ones suffering financially. Every year, funds are takes from the CAP budget to establish measures, which clearly do not achieve their objective, but instead only deprive farmers of funds they could use for more important economic purposes.

Concrete solutions for the future

The Habitats Directive provides for the possibility to grant derogations in cases of particular need due to geographic constraints, making it possible to manage populations and ensure harmonious coexistence in areas such as Latvia, with its lynx population. However, there are very few such derogations and they are granted using a very complex approach depending on the country. Considering the real danger this represents in rural areas, it is high time to grant derogations and provide the inhabitants of the countryside with a sense of control and security once again.

A long-term and realistic solution for the problem of the demographic and territorial explosion of large carnivore populations in our rural areas necessitates the amendment of the annexes of the Habitats Directive with a view to ensuring that certain species with stable and healthy populations can be managed more appropriately to ensure the welfare of humans and nature.

Currently, large carnivores such as wolves, bears and lynx are in the category with "strict protection". This status must be changed to "protected" in order to obtain sustainable and prompt results. Only by managing their population can we restore true harmony and enable nature to redevelop in our European countryside, including the biodiversity that is preserved through pastoralism, which has been placed on the UNESCO world heritage list.

We have had a solution to this problem since the dawn of time, which consisted in appropriate and proportionate protection from attacks. The Habitats Directive, which is thirty years old, has upset this order of things by leaving humans and domestic animals exposed to attacks, while the Commission stands idly by. Thanks to the Directive, large carnivores have been under strict protection, to the detriment of the security of humans and animals, since 1992. The Directive has placed a ban on appropriate management of the populations of these predators for such a long time that it seems almost unthinkable to the Commission to change tack and consider the fate of humans rather than blindly letting our countryside revert to wilderness.

The questions we need to ask are the following:

When will the Commission take action to protect its livestock farmers, its citizens and its domestic animals?

Will it be when the first citizen is attacked in their own back garden?

Will it be when it is too late to take action?

Chairwoman of the Copa-Cogeca Working Party on Sheep