Prior to the CAP agreement, the European farmers' confidence index showed a slight but promising increase in 2021

The European farmers' confidence survey was carried out in seven EU Member States and the UK, and saw a tendency for a slight increase after autumn 2020. However, while the results of the survey show a bit more optimism for the future, they vary across and within countries and even where the sentiment had improved significantly it still remained in the negative spectrum. 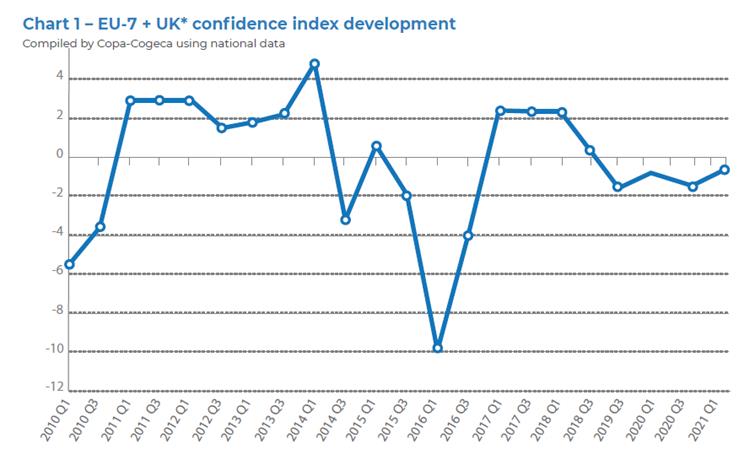 For Belgium (Flanders), the confidence index has generally increased over the past six months, as farmers believe in a recovery regarding their economic situation in the upcoming period. However, the fruit sector experienced a decrease compared to previous surveys due to falling prices, in particular pears due to high stocks and the COVID-19 impact also being felt by the potato, beef and veal sectors.

For France, the level of optimism regarding one's own activity is at the highest level since 2008 with less farmers having been met with significant difficulties compared to the last quarter. Nevertheless French beef, sheep and goat producers are among the least positive.

The confidence index for Germany has stabilised at a low level, with future expectations regarding discussions on the plant protection products and the CAP causing negative influences.

On the other hand, the confidence index in Hungary has slowly continued to increase over the past three months with a continued air of slight optimism towards the future thus tipping the index scale to becoming stable for the next six months.

With Italy being one of the first countries to be affected by the pandemic, it is clear the sentiment has decreased compared to the third quarter of 2020 when the easing of restrictions had boosted the sectors confidence momentarily. In addition the farmers expect a worsening of the situation due to bad weather and a drop in demand for certain products.

For the Netherlands, the confidence felt by farmers and growers has continued to recover, which can be explained by the rise in confidence that initially started during the first quarter of 2021, with the exception of arable farming which showed a decrease in confidence level. The greenhouse horticulture index was at its highest level ever, followed by the pig, dairy and poultry farming confidence index.

When asked whether famers had any problems or difficulties whilst running their farms during the continuation of the pandemic, as showed below German farmers seemed to have encountered the least difficulties and Belgium the most. 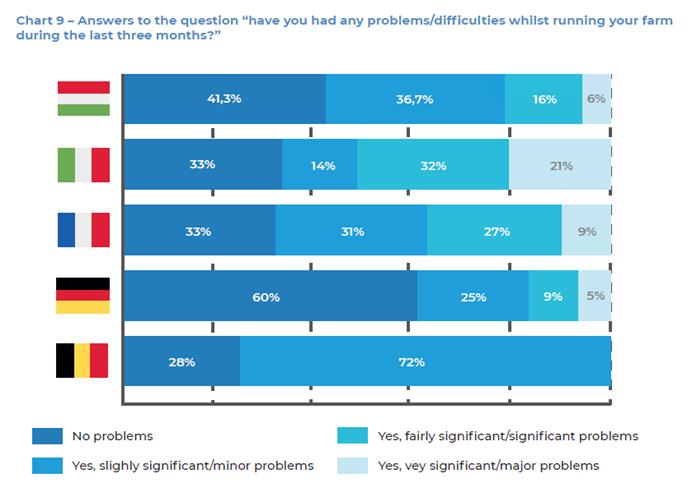 The issues most commonly encountered by farmers were decreases of agricultural prices, weather conditions, health and environmental regulations.

It is important to underline that, even if not expressed in this confidence survey, the recent CAP agreement as well as the European Green Deal targets are certain to have an impact on farmers' sentiments. There are still many concerns for the sector, particularly regarding the overall coherence of the agreement reached, which has to deliver on the ground.