2022 marks the 30th Anniversary of Council Directive 92/43/EEC of 21 May 1992 on the conservation of natural habitats and of wild fauna and flora - the Habitats Directive - which has protected a wide variety of habitats and species in the European Union for the past 30 years. Nevertheless, due to ongoing successful conservation measures, certain populations of large carnivore species are causing increased conflicts, which is exacerbated by challenging legal frameworks. In many cases, legal interpretation of "strict protection" prevents the implementation of active management of the species, which can help to reduce serious conflicts with livestock, people, and biodiversity-rich landscapes. These conflicts are adding to the existing pressures on rural livelihood interests. 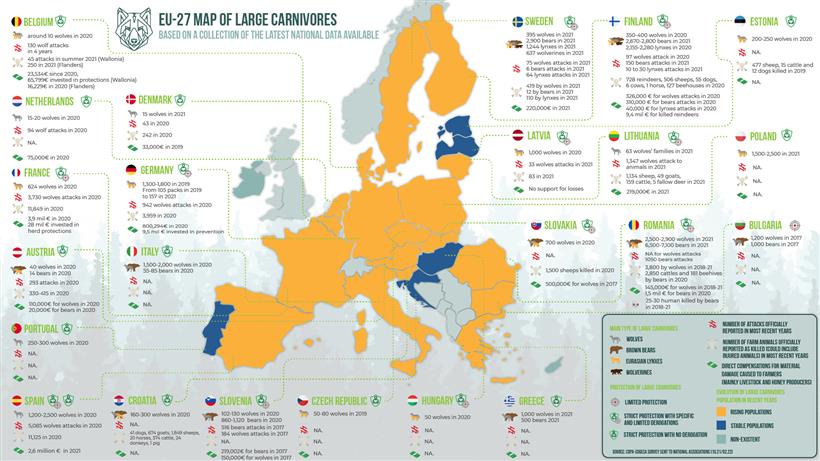 Context: The EU Habitats Directive has an important objective, as expressed in its Article 2, namely the maintenance or restoration, "at favourable conservation status, of natural habitats and species of wild fauna and flora of Community interest", while at the same time the Member States "shall take account of economic, social and cultural requirements and regional and local characteristics".

Unfortunately, the recently published European  Commission's  "Guidance  document on the strict protection of animal species of Community interest under the Habitats Directive" fails to provide clear guidance and clarification on the management of strictly protected species in the light of increasing large carnivore populations and rising coexistence conflicts. Further, certain populations of large carnivore species in the EU no longer require strict protection under Annex IV of the Habitats Directive as they are no longer considered endangered or vulnerable. However, these populations remain listed as strictly protected in Annex IV of the directive. The European Parliament has called on the Commission to put a procedure in place to amend the annexes of the directive, as required in such an occurrence, but these requests have not resulted in any actions.

Livestock conflicts: With an increase in large carnivores comes an increase in fear and attacks on livestock, and in some cases, on humans by bears. Dogs, sheep, cattle, and even ponies are falling victim to unrestrained attacks, with injuries ranging from abrasions to deaths in some cases. For example, in 2020, French farmers experienced the killing of 9,872 animals, mainly sheep, by the national population of wolves; while Spanish deaths in the same year amounted to over 5000.

Alongside this the compensation costs amounts to over 28.5 million euro per year for damage to animals and assets; plus, the average cost per predator being 2,400 euro for wolves and 1,800 euro for bears. Since its inception in 1992, the LIFE programme has allocated over 88 million euro to projects that included prevention and mitigation of damages caused by large carnivores, and an additional 36 million euro are currently invested in ongoing projects. But it is not just the monetary cost which affects farmers, but the psychological cost with farmers having their livelihoods constantly under pressure; their livestock suffer injuries, miscarriages, drops in fertility, and overall loss to their flock. Ever increasing assaults on farmer's livelihoods pose a serious risk to the future of agriculture in some of Europe's most endangered regions, especially in the mountain communities of Europe.

Nature conflicts: The preventive measures put in place consume large amounts of time, money, and labour for rural-dwellers and farmers aiming to protect their homes and their livelihoods. However, more often than not, these measures including protective fencing, alarm systems, housing, and guard dogs actually do more harm than good to the protection and rejuvenation of our biodiverse habitats. Fencing decreases the free movement of larger mammals such as deer and other ungulates; guard dogs can have an extremely negative impact on ground breeding birds and other wildlife; and alarm systems disrupt the natural surroundings. Extensive pastoral agriculture is a practice which is largely in- tune with its surroundings and with the natural habitats in which it inhabits; and as such are key to maintaining and restoring the open landscapes that populate Europe's most remote locations. It is therefore vital to ensure that these regions and rural actors can continue to make a significant contribution to environmental protection and erosion control and to the priceless capital of biodiversity-rich landscapes.

The European Commission has taken a political decision not to present the necessary proposals to adapt the annexes to favourable population numbers. This is in stark violation  of  the  directive's  legal  requirement  that  species  only  be  listed  in  Annex  IV under condition that their current population qualifies them for such strict protection. The consequence of the Commission's position is that it is increasingly difficult for the Member States to fulfil their obligations under the directive – in terms of conserving and sustainably managing these species, while also accounting for economic, social and cultural conflicts.

Further, it is important to note that all species listed under Annex V are still protected. Member States must ensure that their exploitation and taking in the wild is compatible with maintaining them in a favourable conservation status. Moreover, the monitoring obligation under the Habitats Directive requires Member States to have a permanent and structured surveillance system in place. Annex V therefore allows to manage the species while also guaranteeing its protection.

Flexibility to manage regional large carnivore conflicts and to promote successful coexistence: Conflicts and coexistence challenges with large carnivores vary from region to region and greatly depend on the economic-political-social context. To manage these diverse and complex conflicts, flexibility is needed. While the overarching legal framework concerning the management and conservation of large carnivore populations is set at European level, implementation decisions should be set and taken at the local level and regional levels based on active management to increase the sense of empowerment and to reduce conflicts with those people who live in the same area as large carnivores and to ensure successful coexistence.

Funding for prevention measures and compensation be drawn from outside the  Common Agricultural Policy: It is indicative of the increasing population numbers that future attacks on agricultural livestock shall only increase. There are huge costs associated with prevention measures and compensation coupled with the frequent inaccessibility of compensation for some farmers. From a farming perspective, it is essential that any future tools put in place for the attack prevention of Habitats Directive protected species be drawn from other funding streams, outside of CAP funds. CAP funding is already stretched to the very limit.