After a year of challenging climatic conditions in southern Europe, the 2021/22 wine harvest is forecasted to be significantly lower and shorter compared to the previous marketing year. Wine production in the three major producing countries, Italy, France and Spain is estimated to range from around 117.3 million hectolitres (hl); an 18% drop from 2020/21. In addition to the spring frosts which decimated approximately 30% of the cultivations in France and northern Italy, hail, droughts and diseases have further accentuated the losses. Notwithstanding the variability and the uncertain climatic conditions, the quality of the grapes is considerably higher and bodes well for quality wines.

In Italy, wine production is estimated to fluctuate between a minimum of 43.7 million and a maximum of 45,00 million hectolitres, registering a 9% drop. The varying climatic conditions ranging from spring frosts to summer hail, storms and drought have resulted in substantial qualitative and quantitative differences even between neighbouring wine-growing areas. Many areas in northern and central Italy were hit hard by the spring frosts which destroyed up to 40% of the new flower buds, but there are good prospects for white wine.

France forecasts the sharpest drop, 29% compared to 2020/21, as the harvest is unlikely to surpass 33.3 million hectolitres. The spring frosts, which decimated approximately 30% of the cultivations in the country, coupled with plant diseases due to summer humidity, are expected to result in a historically low harvest, inferior to the ones of 1991/2017 and comparable to those of 1977. 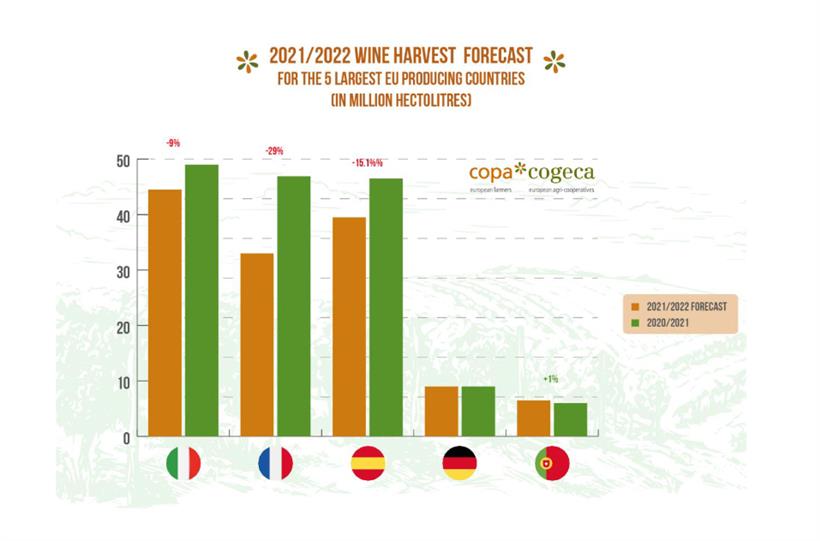 In Germany, the harvest volumes are expected to be below 9 million hectolitres and below the 10-year average yield. Partial yield losses will be due to Peronospora, the spring frost and hail incidents. 2021 is a promising year for sparkling wines.

Portugal is the only country where an increase, albeit dim (+1%), is expected. The drops in production in Azores, Minho, and Lisbon are expected to be offset by the increases in the winegrowing regions of Douro and Oporto and the Terras de Cistercian. Due to these increases, good quality wines are expected.

Hungary expects harvest yields to range between 2.5 and 3 million hectolitres.

Commenting on the market situation, Luca Rigotti, Chairman of the Copa-Cogeca Working Party on Wine stated, "The re-opening of the HoReCa sector and the resumption of exports, including to the US following the suspension of tariffs related to the Boeing-Airbus dispute, brings a moderate optimism. However, the minor production and the long-lasting negative effects of the COVID-19 pandemic show that the sector needs appropriate management tools to address market disturbances."