Following Copa and Cogeca's initial harvest forecast issued in September, the updated data at the end of the harvesting period shows that the predictions were confirmed: yields have dropped considerably. On the positive side of this harvest is the excellent quality of the wines produced. The 2021/22 harvest estimates were presented during the annual Copa-Cogeca Wine harvest event titled "Taking stock of market and consumer trends – The way ahead". 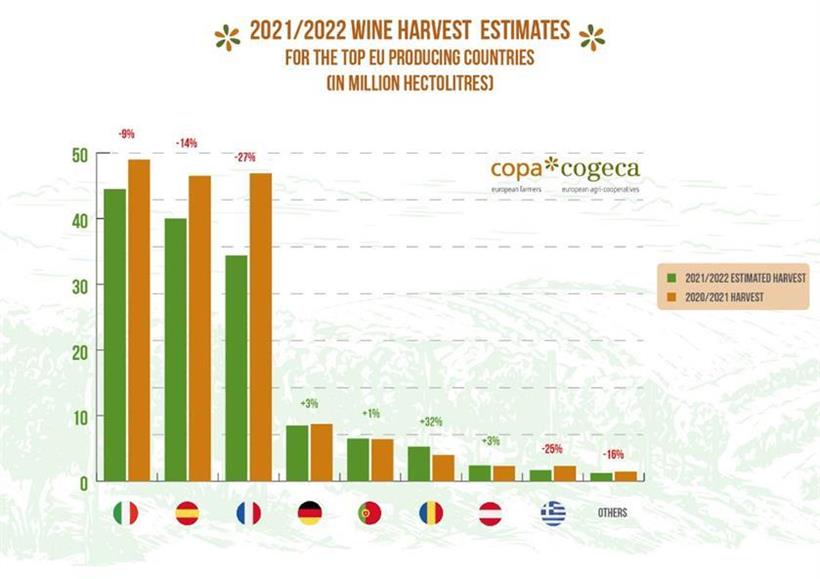 Most countries, and especially the three largest producing countries (Italy, Spain and France), experienced a significant drop in production which is comparable to the 2017/18 marketing year; which went on  record as a very bad year for the sector. The spring frosts, summer droughts, some hail and occasional high temperatures in the month of September, along with plant diseases in some countries, are to be blamed for the low yields.

Climate change is of course one of the most pressing topics the sector is dealing with on a daily basis and in which it is making substantial investments. The topic was also dominating talks during an event on the future of the sector held today by the Copa and Cogeca Wine Working Party. In the introduction of the event, the Chairman, Mr Luca Rigotti, pointed out, "The climate events experienced this year show the extent to which climate change is impacting agriculture and point to the challenges that the wine sector will be facingin the future. Winegrowers are well aware of these challenges and the sector has already put in place several sustainability projects that are being buttressed by quality certificates. However, to continue on this virtuous path and go beyond, winegrowers need adequate resources and time, accompanied by research and innovative technologies. These instruments are essential for maintaining the competitiveness of the EU wines on the international markets."

Addressing  the current market situation in the sector, the Chairman characterised it as bittersweet, "On the one hand, there are positive developments in the market with consumption recovering following the opening of the HoReCa sector and with exports resuming in the aftermath of the suspension of the US tariffs related to the Airbus/Boeing dispute. On the other hand, we ascertain with great worry that production and transport costs have increased exponentially. More specifically, the costs of raw material, energy and transport have risen in some cases to nonviable and unjustified levels, thereby risking eroding marginalities and compromising our competitiveness."

The event gathered experts from academia, the EU institutions and the sector itself to discuss the way forward for the sector, addressing both the challenges and the opportunities, including those of changing consumption patterns, the new CAP and the opening of new markets.